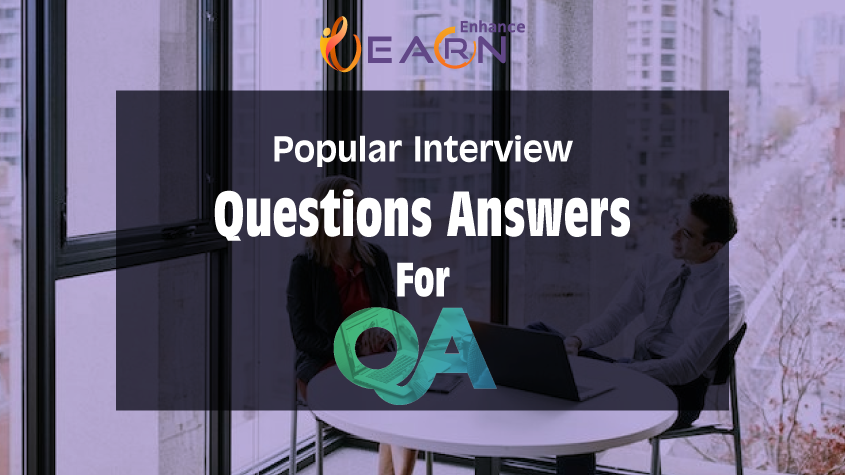 While you are deciding a career you want, there be a lot of questions that will leave you puzzled. It could be any field of your choice but whatever it is, you have to be well-prepared with the basics of it. You should know what you should be known in order to face the interviews that will happen later on.

When it comes to being a QA Analyst, you must know that there are various things that he/she must be aware of.  The most frequently asked QA Analyst interview questions and answers included here will give you a clear idea of your interview preparation. This article will cover each and every aspect which is a must to be a QA Analyst.

Answer: A QA Analyst has to ensure that every possible measure has taken place before testing and the feature of software solution works in a proper manner both functionally and technically.

Basically, any QA Analyst has to take care of the following things:

Answer: Anything can be understood clearly if we have got the foundations strong. Same if the case with testing. A QA analyst must know how to approach, how to get the right resources and make a proper outline of the testing process as well as tracking the progress of the testing project.

The test plan is a record of processes and they are:

Answer: You can define Use Case as the functional black box testing technique which captures the series of interactions that occurs between ‘actors’ and ‘system’. Here users and their interactions are referred to like the actors.

Following are the characteristics of use case testing:

Answer: Test strategy can be defined as the set of guidelines or the testing approach that is generally carried out by the project manager in order to determine the test design. It is used by multiple projects and these are basically found as a small section of the test plan.

Different kinds of test approaches can be followed based on factors like:

These approaches can be further categorized as follows:

Reactive approach: In this approach, the testing approach is started after the completion of test coding and designing

Answer: According to SDLC i.e. Software Development Life Cycle, the testing phase has to be instigated only after the “Implementation and Coding” phase is completed. But if we consider today’s scenario, for best results, it would be a requirement to start the QA of the project or product at the beginning of the project.

Answer: One can define destructive testing as one of those forms of testing which are carried out by the testing team in order to determine the point of failure of the product under different kinds of loads i.e. to evaluate the structural performance of the application which is done to determine the toughness, hardness, and the strength.

You can go through the benefits of Destructive Testing:

Answer: When you are a tester, the focus must be in delivering quality rich products in less time span and that can be achieved by understanding end-user requirement and most importantly, no defects from the end-user side. This is where ‘Agile testing’ comes into picture which follows the principle of agile software development and it quickly validates all the requirements of the client.

Let’s go through the benefits of agile testing:

Answer: Project tailoring can be described as a consistent and ongoing process wherein the performance of the project is accurate and fulfills the business requirements. The entire process would include reviewing and modifying the project data which is according to the current operational need of the organization. The review process is done at the organizational level whereas the implementation of the tailoring plans is done at the project level. The ultimate goal and the requirement of the organization, as well as the customer and user relationship, are the two major factors that should be considered in the process.

Few facets that are considered to be according to the organizational goals under the tailoring process are:

Answer: CMMI stands for Capability Maturity Model Integration. This model was developed by the Software Engineering Institute (SEI). It is grounded on the norm that the processes involved in handling and evolving a product or system would determine its quality. It also delivers strategies for process improvement for the product or even the all-inclusive organization.

CMMI is classified into 5 levels as procured below:

Answer: Following are few of the Automation Testing Tools:

Answer: There are numerous advantages to executing CMMI.

They are listed as follows:

This can be determined by the formula:

Test Effectiveness can be defined as the amount of evaluation of the test environment and its effect on the software application. Here, customer response is assessed when the application requirement is satisfied.

This can be determined by the formula:

Answer: The tool to measure the progress of the project with respect to the execution of new functionalities, enhancement of existing functionalities, etc. can be called as the Traceability Matrix. The entire process has to be taken care of by this tool by keeping an eye on each and every step that takes place. In this way, each and every aspect is maintained as per the date.

Requirement traceability matrix basically consists of the points as mentioned below:

Answer: Build: It is the number given to the Installable software that is offered to the testing team by the development team.

Release: It is the number given to the Installable software that is handed over to the customer by the tester or the developer.

Answer: Bug release happens when software or an application is handed over to the testing team knowing that the defect is present in a release. When this happens, the priority and harshness of the bug is low. This happens because the bug can be removed before the final handover.

Bug leakage is something that happens when the bug is discovered by the end users or by the customer, and it is not detected by the testing team while testing the software.

Answer: Data-driven testing is basically an automation testing framework, which actually tests the different input values on the AUT. These values can be read directly from the data files. The data files may include CSV files, excel files, data pools, etc.

Answer: The test strategy includes obviously an introduction, resource, schedule and scope for test activities, test tools, test priorities, test planning and all those types of tests which are required to be performed.

Answer: The systematic and independent examination of determining the effectiveness of quality control procedures is known as Quality audit.

Usage of the tools depends on the project it is being used for.

Answer: The document that describes the system response and the user action for a particular functionality is called a USE case.

It includes the table of contents, revision history, and flow of events, cover page, special requirements, pre- and post-conditions.

Answer: It is a process to control and document any changes which are made during the life of a project. The important aspects of configuration management are Release control, Change control and Revision control.

Answer: Ad Hoc testing can be defined as one of those phases where the tester tries to break away the system by randomly trying the system’s functionality. It can include a negative type of testing as well.

Answer: Following is the list of roles of an SQA Engineer:

Answer: A stub is called from the software component to be tested. It is used in the top-down approach. The driver calls in a component to be tested which is used in the bottom-up approach. This is basically required whenever there is a need to test the interface between modules X and Y and only X module is developed. So, we see that we cannot just test module X. If there is a dummy module, we can use that dummy module to test that module X.

Answer: A Bug triage is that process which:

Answer: A Cause effect graph can be defined as a graphical representation of inputs and the associated outputs affect what can be used to design test cases.

Answer: A Gantt chart is basically used to represent a project schedule that includes the duration of individual tasks or phases, their ordering, and dependencies.

Answer: As you know QA stands for Quality Assurance. QA team assures the quality by monitoring the whole development process. The job of the QA is to track the outcomes and making appropriate adjustments in order to meet the desired output or the proper functioning of the project.

Answer: Following are the main attributes of Test Automation:

Answer: Monkey testing is a type of Black Box Testing which is used mostly at the unit level. In this tester, add the data in any format and check whether the software is crashing or not. It should not.

In this testing, we use Smart monkey and dumb monkey.

Answer: There are many advantages of test automation and test cases should be automated whenever it is possible and appropriate. However, there are certain scenarios when test automation is not desirable and manual testing is a better option:

Answer: QA activity has to start from the beginning of the project. The earlier it starts, the better it is as far as quality assurance is considered.

The cost, time and efforts are extremely challenging in case the QA activities gets delayed.

Answer: A good test case is simply the one who finds a defect. But is not mandatory that all test cases will find defects, so a good test case can also be the one which has all the prescribed details and coverage.

Answer: The best way is to immediately write a test case for the production defect and include it in the regression suite. In this way, we ensure that the bug does not get introduced ever again.

Also, many times, we can also think of alternate test cases or similar kind of test cases and include them in your planned execution.

Answer: The main artifacts used are:

There are 3 verification techniques that are prevalent namely Review, Inspection, and Walkthrough.

1) Review – Is a method with the help of which the code/test cases are examined by an individual other than the author who has produced it.

It is one of the easiest and best ways to ensure coverage and quality.

2) Inspection – Is a technical and disciplined way to examine and correct the defects in the test artifact or the code. As it is disciplined, it has various roles to play, which are as follows:

3) Walkthrough – It is a process in which the author of the document/code reads the content and gets the feedback.

Most of the time, it is called as a kind of FYI (For your information) session.

Answer: The test must ensure that:

Answer: Test cases are not generally straight-forward and the QA Engineers will be required to act on their personal judgment. They need to feel comfortable with ambiguity.

Answer: Various times within the QA process, the test case fails. But why are they failing? This can be problematic. A great QA engineer is able to provide exact reasons to the developer, rather than simply saying that a test case has “failed”.

Answer: NO. All the test cases need to be run and making guesses frequently leads to issues down the road.