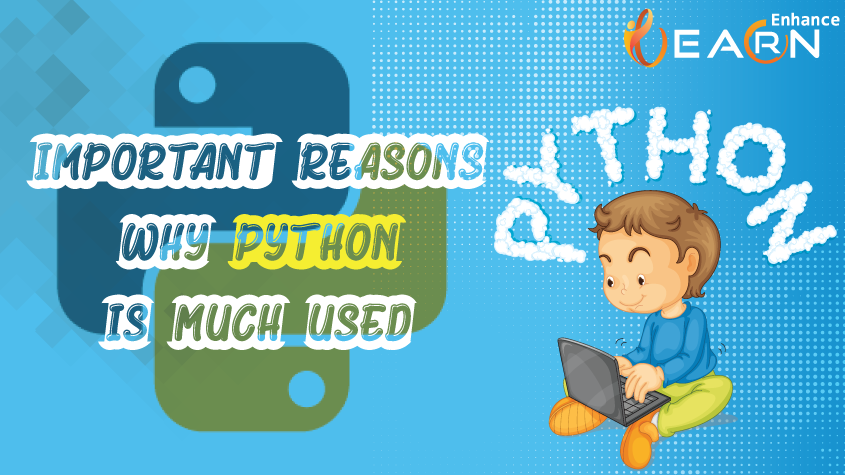 Reasons why Python is used as a good programming language:

While writing a software application, one needs to focus on the quality of its original code to simplify maintenance and updates. The syntax rules of Python are so simple, which allows you to express concepts without writing additional code.

Unlike other programming languages, Python emphasizes explicitly on the readability of the code and also allows the user to use English Keywords instead of punctuations. Hence, giving you the ability to build custom applications without writing additional code and the outcome is not just a messy code but a readable and clean code which will even help and efficiently update the software without wasting extra time and effort.

At the same time, Python happens to be a dynamic type system and also an automatic memory management tool. All these various approaches and language features help you to use Python for developing large and complex software applications efficiently.

Currently, Python supports almost every operating system, apart from a few. It can even be used to run the code on specific platforms and tools. Also, Python is an interpreted programming language.

It allows you to run the same code on multiple platforms without the recompilation of them. Hence one does not need to recompile the code after making any alteration. You can check the impact of the code immediately after you modify the application code without recompilation.

Its extensive and powerful standard library makes python score over other programming languages. The standard library allows you to choose from a wide array of modules according to your specific needs. Each component further enables you to add functionality to the python application without writing additional code. For example, if you are writing a web application in Python, you can use specific components to implement web services, perform queries, and manage the operating system.

You can even find information about different components by browsing through the Python Standard Library Documentation.

Also, having an option to choose from a wide range of open source python frameworks and development tools according to your requirements will help you cut time without affecting your surrounding projects. You can even simplify and speed up web application development by using standard python frameworks like Flask, Django, Bottle, and Cherrypy.

Also Read: Why Is Python So Popular? – Reasons Why Python Is Used Widely

Python is designed explicitly with features to aid data analysis and visualization, giving you the advantage of data analysis features of Python to create modified Big Data solutions without putting extra time and effort. Moreover, Python also provides the user with data visualization libraries and APIs to help you present data more appealingly and effectively.

It even makes it easier for you to perform coding and testing both simultaneously by adopting a test-driven development (TDD) method. After writing the code, you can use the tests to assess the application code continuously. The tests can also be used for maintaining the application requirements based on its source code.